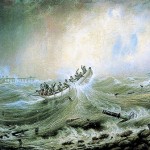 The Series A crunch and the 38 studios debacle have lots of parallels even though the money raised by 38 was huge. Because it barely got a first product out, it parallels many of the challenges that seed companies currently face. I have had this post in my drafts folder for quite a long time and almost tossed it, but hearing the noise about seed companies struggling to get future rounds of investment, I thought it remained pertinent. btw: The crunch is not a change in VC behavior — just a radical expansion of seed companies vying for the same # of Series A deals done every year. VC bonanza!!

Who do you want in your lifeboat?

For anyone raising money and evaluating investor partners, there is no better expression to capture the ups and down of investor relations in startups. When the going is good e.g. “rising tide lifts all boats” —  everyone is happy. Perhaps greedy, but generally happy. And investors at times can be more interchangeable during heady times. The term “dumb money” was coined to illustrate indistinguishable money. Money with no added value. During a storm, who do you want in your lifeboat?

Series A Crunch: When the Going Gets Tough:

But when times are tough for the startup, it really matters who your partner is. That’s because interests are rarely aligned when things aren’t going well. Here’s a list of misalignments that can absolutely kill your company, much less get you squeezed out financially or literally. Generally, there are three stages of misalignment between the entrepreneur and the investor in tough times.

Stage 1 — Protect the Value of the Investment

Stage 2A — Get more in tough times

Stage 1 will normally result in one of two outcomes — making the investors feel better or worse. Neutral is not a feeling they will be experiencing. In this scenario, investors are optimistic about the business and may often seek to increase their stake at the entrepreneur’s expense.  The classic term sheet item here is “Anti-dilution protection”, which hopefully, most entrepreneurs do not have to go through. The terms of Anti-dilution essentially mean that the % of ownership of the company is maintained by the original investors regardless of the final valuation in the new round. The math works out that as new money comes in, the normal “everyone gets diluted” process is thrown out and instead the common stock holders are the only ones really diluted. A full explanation can be found here; its ugly.

The flip side of getting more is for investors to cut their losses and sell as fast as possible. Protect their value is a very logical reaction when investors move from optimism to downright pessimism. Unfortunately, their reaction becomes a tell-tale to every would-be buyer and drastically reduces your negotiating leverage. These situations rarely end well and terms like aqhire are pleasant ways of describing a fire sale of product and talent. Usually, the acquirer is just buying teams, more quickly than they could in any sort of traditional recruiting process.

If an aqhire is not in the cards (team is on the wrong coast, technology is the wrong type or there are no other alternatives, investors will look to shut the company down fast in order to minimize liabilities and litigation. If they are asking you to make sure that vacation time has been paid up and that wage taxes are paid, its a good sign that the outcome is not going to be pleasant.

Hopefully, any of you reading this will never get to Stage 3. If you see signs of Stage 2B, overcommunicate the facts and prepare your own exit as an entrepreneur. Don’t feel like you have to be the last person in the ship. Realize that there is very little upside for you sticking around since whatever notion of loyalty described in earlier stages has been abandoned by the investors by this point in time.

Curt had no business raising money from an investor like Rhode Island. The lawsuit just filed demonstrates their institutional inflexibility. Compared to VC’s, there is no room for failure with governmental capital.

Final Notes on CEO Communication – How much do you share?

Curt Shilling did not have this option since he had over invested his own capital in the company, picked a very rigid investor (State of Rhode Island) and did not overcommunicate. This last point is a tough one for CEO’s. If you over communicate, you risk the potential loss of great team members. But if you don’t, you risk creating havoc in their personal lives and causing irreparable damage in your relationships with them. Let them make the choice. Family is always first and we as CEO’s need to respect that.

Failure — Its not the entrepreneur who failed, its the business that failed

5 Learnings from the Shutdown of Hangout Industries

Our Experience at Techcrunch 52 — Hangout Industries